Towards the back end of last year it was apparent that I was in need of a shoe upgrade as my old pair had developed some additional holes; mainly around the toe area. Which wasn’t ideal.

My, now old, pair of cycling shoes were Bont Riots from around 2015. They were the shoes with the bakeable sole (although I never did that) and had a full carbon sole. I think I paid about £100 for them back then and they lasted me for 4 years; which I think is a very good return. In terms of my comparisons the Shimano’s will be compared to these.

In terms of my search critera I was looking with the following requirements:

Of the three criteria points the first two were the most important.

As many of you are probably aware: It is a bit of a minefield when looking for cycling items when there is so much choice (e.g. bikes, sunglasses, helmets and shoes). With that in mind I started at Bont again and had a look at their updated versions of the Riots. At the backend of last year, when I was looking, these were coming in at £150; so it was back to looking. The Riots did tick a couple of the boxes, mainly the carbon sole and Boa dials.

I looked at other brands such as Fizi:k, Giro and Sidi. I then stumbled across the Shimano RC7 shoes on the Merlin Cycles website.

When comparing the Shimano RC7 shoes against those of the above brands at this price point, I felt that there was more bang for the buck. The Shimano’s were reduced from £169.99 to £115 and offered a carbon composite sole, Boa dials and were around the desired price point. For this reason I pulled the trigger and bought them.

Excited was an understatement for their arrival.

My old shows were a tired, off white colour with a hole appearing in the toe box. These are a beautiful striking red. 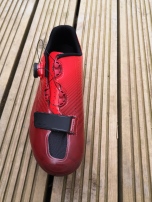 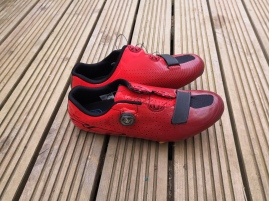 Upon unboxing them I had a look over them and they were perfect. I was a bit anxious about setting up the cleat position on new shoes but in reality there were far more positional markings on the bottom of these then there was on the Bonts. It made setting them up a piece of cake and after a short test ride and minor adjustment we were comfortable. 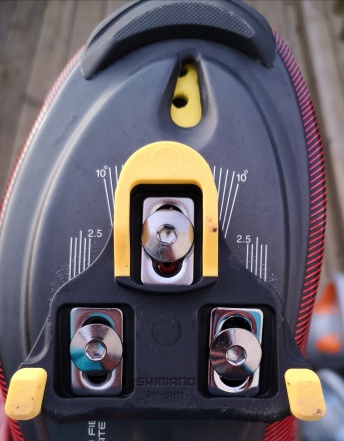 When trying them on for the first time they felt luxurious compared the Bonts. The inner sole felt thicker and softer which was a nice combination; as the Bonts could feel harsh. The Shimano shoes are noticeably narrower than the Bonts. This wasn’t a problem for me fit wise but if you are on the cusp, or do have, of wider feet then I would certainly get the wide fit ones.

I’ve covered about 1500 miles in them this year so far after swapping from the Bonts; once the weather picked up. I am not disappointed by these shoes in the slightest. The sole itself feels less stiff than the Bonts but I feel they are more comfortable; therefore that’s a trade off I’m happy with. As, I do not race I don’t feel I need the stiffest available sole. The sole has a stiffness rating of 10.

The only slight niggle, and it’s not a criticism of the shoes, is if you overtighten the Boa dial and need to release some pressure you have to completely undo the Boa dial by pulling up on it. It doesn’t unwind by moving the dial anti-clockwise.

As mentioned though, this isn’t a criticism of the shoes as on the next model up I believe the Boa dials have that feature. As you know though, I like a bargain and try to stick to a price point so that’s on me not stumping up the extra cash!

Finally then, I would recommend these shoes and at the price point that the sale discount took them down to I would say they are a steal.

Thanks for reading and happy cycling 🙂